If Umno is racist, then what about racist MCA, Gerakan, DAP and Chinese Educationist?! 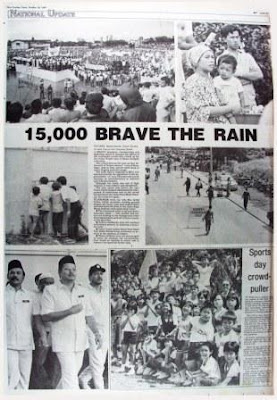 Blast from the past, Najib flanked by Nazri Aziz and another Umno Youth member before entering TPCA 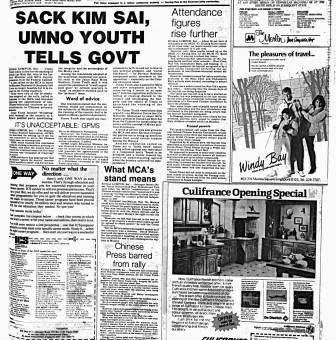 Lee Kim Sai told to be sacked, he must have done something really bad to multi-racial Malaysia, in fact I know he did and I support Umno for its stance on the issue!

Did anybody ever bother to ask why Umno Youth, or the Malays behave the way they did in 1987. It was triggered by Brother Anwar Bin Ibrahim, who was a Minister of Education at that time, whose policy on the Chinese education issue where non-Malays were to teach at Chinese school on certain subject (correct me if I am wrong) which had led to a massive friction in the country that also led to a massive rally at a Chinese temple attended by all the CPM or Chinese Party of Malaysia -- that is MCA, DAP and Gerakan and the Chinese educationist??!!

During that meeting, the police have the transcript, you should hear what racist Lee Km Sai among them, who was MCA Youth leader (correct me again if I am wrong) had uttered so many racist remarks about the Malays and the Sultan and the whole Malay system.

Lee Kim Sai was equally racist and for that reason he was stripped of his Datukship. No racists remarks were started by gthe Malays it has always been started by the Chinese. Again the Malays can never started anything so despicable as to create chaos in the country, we must always remember this, and I challenge anyone to say that the Malays were always the one who started any racial sentiment that led to bigger problem.

So in the case of 1987 at the Chinese temple, what were they (Umno leaders to be specific) to do in view of racist remarks made about the Malays? But to hold another rally at TPCA, of course.

I am pretty sure it was Brother Anwar Bin Ibrahim who recommended the rally at TPCA when Najib took over as an acting Umno Youth leader.
My point is this, it was always Brother Anwar Bin Ibrahim who had caused all of these political commotions and upheavals that have led the country to be astrayed from its original aim, that is to live peacefully and harmoniously among races.

My point is, it has always been this man Brother Anwar Bin Ibrahim, who creates havoc when he was in and when he is out. Don't ever forget this!
sumber : http://barkingmagpie.blogspot.com/
Posted by Aspirasi at 11:03 PM